On Feb 23rd 1824, at Boherlahan, an Irish village near Cashel in Tipperary, a farmer from Cashel by the name of John Cooney married Honora Strapp. The marriage was witnessed by the bride's older brothers William and John. Honora came from nearby Camus (in Gaelic meaning 'crooked water' ie it was near a bend in the river) where the Strapp family farmed an area of 38 acres at one time in this very fertile part of Ireland beside the River Suir. 1 The couple had nine children. 2 The one of particular interest to this story, Bridget, was baptized on March 21st 1827, at which time her parents townland was recorded as Mt Judkin. For later children the townland is recorded as Hore Abbey, but only a road separates these two townlands about 3/4 mile from the famed "Rock of Cashel" 3

Between 1847 and 1864 a detailed, county by county record of tax liability was kept in Ireland. The Griffiths Valuations for 5th Oct 1850 for Tipperary South list a John Cooney Jr as a small farmer leasing a house, offices & land of just over 20 acres in Hore Abbey. The land was valued at 22 pounds 7 shillings and the buildings at 2 pounds 5 shillings. The term 'offices' could refer to a stable, cow barn, turf shed, etc. The land was leased from a Robert Clark esq and John in turn had sub-let a house (value 7 shillings) to a Patrick Burke, most likely someone who helped on the farm. John Cooney is also listed among the Tithe Defaulters of 1831. The English Parliament required that all landholders and tenants in Ireland would pay a 10% annual Tithe of their land's profits directly to their local parish's Protestant Minister for his support and for the maintenance of his parish church. This was difficult for the Catholic farmers who also had to support their own church. The resistance to the tithes increased after the amount of the tithes was greatly increased in 1826. In 1831 these local reactions grew into larger scale resistance to the tithe collectors and the start of the Tithe War. Resistance was sometimes violent and eventually led to the end of any attempt to collect tithes in 1838. 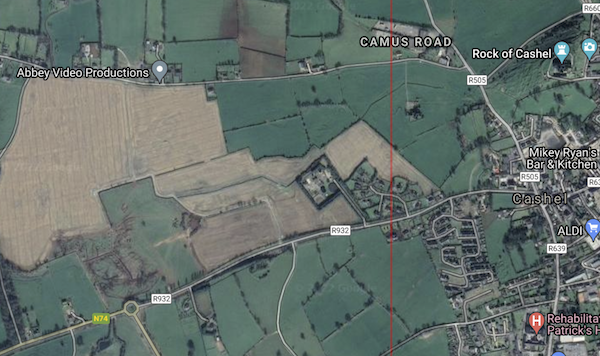 Modern satellite view showing the location of the farm of John Cooney as indicated in the Griffiths Valuation. The green paddock in the lower left corner of the map on the north side of the roundabout at the junction of the N74 and R932 corresponds to the actual farm. The house to the left of the N52 marker was also the site of the house in 1850. Details of the valuation and an 1850 map can be accessed and viewed here Enter the name John Cooney, select the county Tipperary South Riding and Parish of Horeabbey.

The name Strapp is a very unusual one and it is thought by some to have German origins. One theory is that in the rebellion of 1798 a member of the O'Meara family incurred the wrath of English law and had to flee Ireland with a price on his head. He found refuge in Germany where he married and lived under the assumed name 'Strasse' which on his return to Ireland he changed to 'Strappe' and which was later written without the 'e'. Other family members have cast doubt on this theory. Another explanation that has been put forward is that the name was Huguenot in origin with a third possibility that the Strapps came to Ireland as part of the Palatinate settlement from the Rhineland that was established near Adare in Co Limerick. Against this is the fact that the name is found in England as far back as 1610. Whatever the case the family soon integrated into Irish society and established themselves on what would have been a prosperous farm in Co Tipperary. The common crops grown in the area were potatoes, corn and turnips; more than likely they would have supplemented their diet with trout from the river and also had cows to provide milk and butter. A story preserved in the family was that they also bred horses and one of them was supposedly purchased by an Englishman with a keen eye for such things which as 'Old Joe' subsequently won the British Grand National Steeplechase in 1886. 4 View from the "Rock of Cashel", Co Tipperary looking in the general direction of the area farmed by the Strapps. The ruins of Hore Abbey are in the background.

Nothing more is known of John Cooney's family origins although there were a number of families of that name living in the Cashel - New Inn area prior to the famine. The fact that he is identified as John Cooney Jr in the Griffiths Valuation suggests his father's name may also have been John. Although John came to Australia, Honora did not. Perhaps she did not survive the famine. If she died in the district a possible burial place is at Ardmayle which although being a Protestant graveyard continued to be the burial place for the Catholics of the area as well. 5

The disastrous potato famine of the 1840's resulted in the deaths of hundreds of thousands and the migration of similar numbers from Ireland which it is estimated halved the population of the country in the space of a decade. Possibly it was as a result of this cataclysmic event that John Cooney and his surviving children including his daughter Bridget decided to leave Ireland. They do not appear to have travelled together unless the full fare for the whole family was paid which would suggest that they were at least moderately well off (whilst records of assisted immigrants to Victoria have survived there are very few records of unassisted arrivals). It seems that Bridget and her sister Mary migrated first although apparently not together. Bridget most probably arrived at Geelong aboard the "Credenda" on Nov 3rd 1853. This vessel of 901 tons, under the command of Captain Patrick Culliton carried 301 passengers, mainly Irish, and sailed from Southampton on Aug 6th 1853. 6 According to the shipping records, Bridget was a domestic servant from Co.Tipperary, a Catholic, and unable to read or write. Her age was recorded as 20 years. 7 Upon arrival the records state that she had "gone with her cousin John O'Brien of Pt Henry." 8

Although some of the details do not fit, the vessel most likely to have brought most of the other members of the family to Australia was the 'Caractacus' which sailed from Liverpool on Nov 21st 1857 and berthed at Melbourne on Feb 19th 1858. Aboard were John Cooney (50), Patrick Cooney (22) and Thomas Cooney (14). All were from Tipperary, all were Catholic and all were labourers. Except for Thomas the ages given are not consistent with other documents but as Thomas was the only one of the three who could read and write this is perhaps not surprising. (Patrick was listed as being able to read but John could neither read nor write). Also aboard was a Catherine Cooley! aged 17, also from Tipperary, a Catholic and unable to read or write. A note beside her name indicates that she went with her sister Mary Vinsted! of Point Henry. The reference to Point Henry suggests that this may be Bridget's sister travelling on the same boat as her father and brothers with her surname mis-spelled. If this is the case then the sisters have also been confused and the married name mis-spelled, as by this time Bridget was Mrs Benstead and Mary was Mrs Heaney. At least this explanation accounts for the arrival of all the members of the family who are known to have come to Australia except for Annie (Honora). Possibly she came out with her older sister Mary but I have been unable to satisfactorily identify when either of these came to Australia. 9 Site of the Strapp farm at Camus near Cashel, Co Tipperary photographed in 1995. The foundations in the foreground are most likely those of the house in which Honora Strapp lived in the early 19th century. The ruins of a later house are in the background and the barn is on the right. Br Joe Perkins is on the left and Tommy Strapp a distant cousin is on the right. Tommy was still living in the area at the time of my visit and his own father's childhood home is the one pictured in the background.

The Cooney family seems to have farmed in the Pt Henry-Moolap area east of Geelong for many years as many of their descendants were still living in the area well into the next century and a "Cooney St" is to be found in Moolap at the present time. John Cooney died at his residence in Moolap on June 20th 1876 at the age of 77yrs. He was buried in Geelong's Eastern cemetery two days later. 10

On August 21st 1856, Fr Eugene McCarthy celebrated the marriage of Bridget Cooney and Thomas Benstead at St Marys Church in Geelong. The ceremony was witnessed by Patt Brien (probably one of the O'Brien cousins from Pt Henry given that it was a common Irish custom to drop the 'O' prefix of the surname) and Margaret Haney (who marked the register with an X) 11 Bridget gave her age as 24 years, 12 her place of birth as Tipperary, Ireland, her abode as Pt Henry, her occupation as servant and her parents names as John Cooney (farmer) and Honora Strapp. Thomas Benstead is recorded as being a 29 yr-old labourer of Pt Henry, born in Kent, England. His parents names were given as Thomas Bensted (labourer) and Hannah Brooker. Both Thomas and Bridget marked the register with an X. 13